skip to main | skip to sidebar

At first glance, these lemon bars appear enticingly simple: bright lemon custard resting on a bed of shortbread, finished with a dusting of pure white powdered sugar. But of course, looks can be deceiving, and as the name suggests, these bars are flavored after an age-old Latin American dessert favorite. Upon taking a bite, you’ll experience the unique satisfaction derived from a spoonful of exotic lemony egg custard—flan—melting in your mouth. 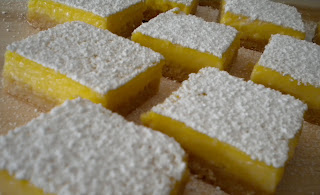 It wasn’t altogether difficult to infuse these already refreshing lemon bars with the flavors and ingredients common to traditional flan recipes. Using warm sweet cream infused with honey and vanilla, our bars stand apart in both taste and texture from their more ordinary counterparts. Tart yet sweet, rich yet impossibly light, these lemon bars transcend the familiar and take you to a place recognizable through taste alone.
at 8:17 PM No comments: 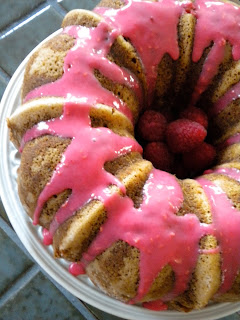 I am familiar with the adage: If it ain’t broke, don’t fix it. But here I was, meddling with my grandmother’s recipe for an absolutely perfect coffee cake. A cake that has, at times, served as the literal and symbolic centerpiece at family gatherings. So moist and light, with a crust that serves as a perfect complement to the delicate crumb within. Why would I—how could I?!—make any changes to this cake that would actually elevate its deliciousness? 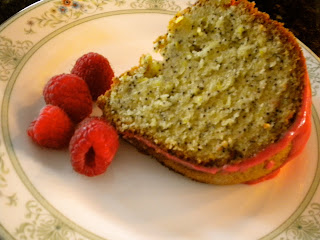 Consider this
cake my homage to the original, rather than a revision.
I have attempted to create the ultimate Bavarian coffee cake by embracing and including ingredients found in the German treats my grandmother shared with me growing up. Brightening the cake with lemon and freckling it with poppy seeds, it is then draped in raspberry icing, all of which is intended to capture the warm, rich fillings found in Linzertorte, rugelach, and hamentashen. All it lacks is a complementary cup of coffee!
at 10:53 AM No comments:

It didn't require much digging to happen upon these delicious treasures. In fact, we didn't make it further than Emma's kitchen cupboard before we discovered the key ingredients for our West African-inspired peanut butter-banana cookies. While countries like Ghana and Senegal aren't necessarily famous for their confections, their peoples certainly don't ignore sweets altogether. Rather, they scour natural food sources to satisfy their cravings, and amongst their favorite treats are their plentiful and enriching bananas. With bananas and other fruits and root vegetables, West Africans find creative ways to celebrate their abundant harvests, making custards, called fools, along with more European- and American-based treats. 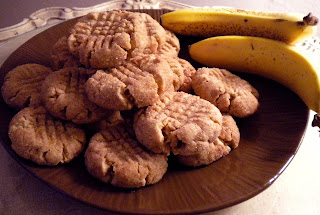 Following the tradition of using local, readily available ingredients, West African cuisine also showcases the peanut, a food staple that is both scrumptious and nutritious, and is used mostly in savory dishes, including stews and soups. Of course, we've taken the liberty to find a sweeter application for the beloved peanut in our own baking adventures!
After a bit of fact-checking, the remainder of our work in the kitchen was simple. We enthusiastically grabbed the peanut butter and mashed some bananas, and stirred together a perfect marriage between two of our favorite indulgences. Our Gold Mine cookies sparkle with cinnamon-sugar, contributing yet another delicious dimension of the West African flavor palate to an already indelible dessert!
at 3:49 PM No comments:

Life without Mexican food is no life at all. At least, I think so. Rich with color, flavor, and zeal, our south-of-the-border neighbors boast a cuisine that parallels the energy and cheer of their culture. Mexicans have not only achieved the art of palatal perfection through their menu of savory dishes, such as tamales, tortillas, and quesadillas, but they can also be applauded for a sweet discovery that dates back nearly 2,000 years: chocolate.
Chocolate, though now typically prepared as a saccharine treat, was in fact originally consumed as a bitter and spicy drink. It wasn't until the sixteenth century that the influence of transatlantic trade and technological innovation transformed the Mesoamerican version of chocolate into its contemporary character. In present-day Mexico, however, the ancient flavors of chocolate still stand in the treat's new-found reputation: infused with sugar, cinnamon, and almond, Chocolate Mexicano is a mouthwatering and unique combination of flavors. 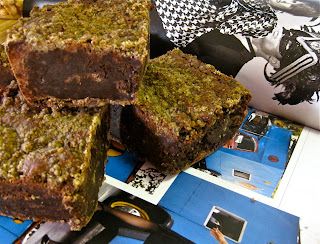 As I sat down to contemplate a way to communicate the depth and history of Mexican chocolate, my mind kept wandering back to one of my favorite American dessert classics: the brownie. Prepared with copious amounts of chocolate, a panful of brownies quickly proved to be the best way to showcase each flavor found in Mexican chocolate. My brownie squares, aptly entitled "Brownies Mexicanas," are rich bites of chocolate and almond cake, topped with a distinct cinnamon coffee streusel. One bite of these postres and you'll be living la pura vida.
at 12:33 PM No comments:

I'm a sucker for alliteration. And carrot cake. And Indian food. Thus, I admit, these cupcakes were willed into existence by my own selfish desires to invent my favorite dessert.
Melding and morphing two beloved Indian pudding-style desserts into carrot cupcakes was really quite simple. Gajar halwa—roughly translated as "carrot pudding" from Hindi—is a sweet treat that can be prepared in a matter of minutes using a few readily available ingredients. Sprinkled with cardamom, and browned with sugar on the stovetop, the tender carrots are steeped in ghee (clarified butter), and garnished with crunchy cashews. Shrikhand, another equally popular and delicious pudding, comprises vanilla-infused yogurt, colored with delicate threads of golden saffron. 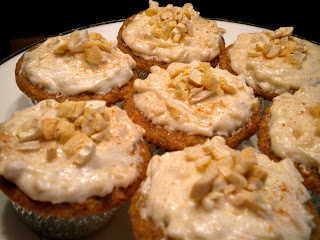 With such a bounty of flavors and textures, I wanted to be sure that these cupcakes would rightfully showcase each one. Balancing the spicy, full-bodied flavor of the cakes is a tangy yet sweet frosting that offers the crunchy satisfaction of chopped cashews.
at 4:55 PM No comments:

What's in a name? Apparently more than Bill Shakespeare had presumed. The deceivingly simple substitution of a w for a v in the name of this delicious confection can bring your tastebuds from Greece to Lebanon in the course of one dessert order. Names matter, especially when it comes to distinctions amongst the varieties of the flaky, buttery, and deliciously syrupy dessert at hand. 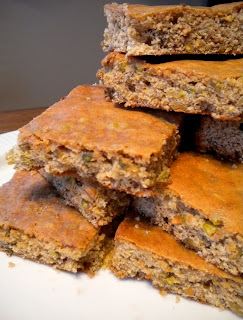 As the name of this blondie suggests, I have opted for a more Middle Eastern approach to dessert. Using crushed pistachios, orange blossom water, and spices more reminiscent of Amman than Athens, these squares elicit some of my fondest associations with Middle Eastern foodways. Rich with honey, and tart with yogurt, there is no mistaking this blondie for its Greek counterpart!
at 7:10 PM No comments:

Struth! 'e was a ripper!

'ey, mate! Can you guess what's on the menu for tonight? It's traditional New York black and white cookies...Aussie-style! We're all familiar with the popular City treat: a cakey cookie, adorned with vanilla and chocolate fondant; but few are savvy Australian foodies. It turns out, according to a few of my Australian mates, that a sweet treat called the lamington is one of the most popular desserts in the land Down Under. A lamington, by definition, is a small cube of day-old butter cake, decorated with chocolate icing and dipped in coconut flakes. YUM! The tantalizing flavor of this dessert has has even earned a spot on the Australian calendar: "National Lamington Day" is celebrated on July 21 each year!
The work to reinvent the lamington was cut out for me: to embrace the simple flavors that make this dessert such a hit, I turned to one of the most classic confections in America. The black and white cookie stood out as the perfect base to deliver the Down Under taste I was seeking. The differences between the lamington and the black and white cookie are subtle, but very natural to work with. Butter cake=sponge cake cookie; chocolate icing=chocolate ganache; coconut flakes=vanilla ganache. The final product? Well, you'll see below that these Black and White Lollies really are rippers! 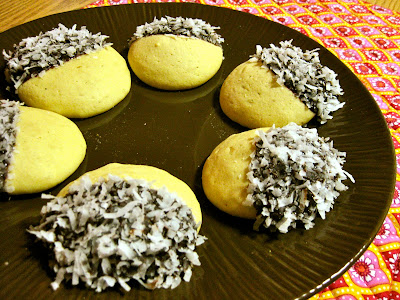 'Sweets on Earth,' founded by Shannon Frank and Emma Klein, is a small-scale baking project that is featured at the Kentland's Main Street Market Pavilion. This unique stand showcases classic American confections, reinvented to embrace the international foodways that define our culture.
Be sure to visit 'Sweets on Earth' every Saturday from 10-2pm, beginning May 1st, 2010!

I will visit 'sweets on earth' upon its opening in May 2010!

Promote Your Page Too